Following in the footsteps of Ms. Jenny....

Name: Regina, also known as Blue
Home: Jacksonville, FL, late of New Jersey, late of New York
Why do you like Steampunk? I like the blending of the Victorian Era's refined social sensibilities with the possibilities afforded by advanced technology. It also gives me a fantastic world to place over my own life as a veneer when I'm feeling overly mundane; battling traffic on 95 is much more fun when I'm pretending my car is a vanship.
Favorite bit of clothing: My surprisingly versatile black leather waist cincher.
Favorite accessory: My growing assortment of fingerless gloves.
Cake or Pie?: It's like choosing between children... ohhh.... pie.
Best music in the world is?: The Mountain Goats, Sleater Kinney, Neko Case, Vampire Weekend, Rilo Kiley... I could go on, but I'll spare you. ^__^

Do you have a Persona?: Yes.
If so who are they and what's their story: Theodora "Tessa" Racht, American, courier and scout-for-hire. I'm still working on her details.

Now post photos so we know what you look like and can hug you when we see you on the street Here I am! No, I don't know what's up with my hair.


Are you a good egg?: I try.
Pimp your stuff: I'm on the staff of Salon Convention, where I discovered steampunk those many years ago (aka 2006). I also have a few non-steampunk blog projects.
Steampunk heroes: Mina Murray from League of Extraordinary Gentlemen, Karen from Code Geass (okay, it's not strictly steampunk, but arguably)

Thank you to everyone who came. I was a bit overwhelmed by the turn out. Much fun was had, and there will probably be another soon. In the meantime, enjoy these photos: 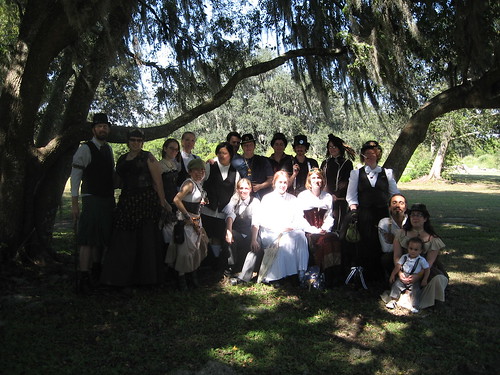